“Former Brazilian soccer player Eliane Nascimento, better known as Lili, inaugurated on Wednesday in Bolivia a program of support to new female players, intending to extend through South America in order to reach the level of Japan, Germany and the United States, considered the strongest countries in the women’s soccer.
Eliane, who heads the Association Estrela Sports , went to city of La Paz (Bolivia), to support the creation of a female football school, which began operations on Wednesday with 30 girls between 7-15 years.
According to former player, South America needs a project basis “for begin forming players since seven years, and this is one of the tasks that Estrela Sports is doing in Brazil and now intends to apply in Bolivia and in other countries.”
The association, according to former athlete, currently works with 280 girls in favela of Rocinha in Rio de Janeiro, and also fight against discrimination. “the best mechanism for social inclusion is the sport,” she said.
Lili said that currently the best of women’s football is in Japan, Germany and the U.S., and that “they are countries very strong,” but she pointed Marta as the best player in the world.
Elaine, who played at clubs like Santos, Flamengo and Botafogo, besides the Brazilian WNT also promotes the campaign “Say yes to women’s football,” which has the support of several Brazilian authorities, besides Barcelona and the German Football Federation.
According to the former player, the prejudice to women in the sport has been overcome, but we still need to mobilize governments, businesses and celebrities to expand women’s football.
La Paz has football schools for a decade, but the idea of creating a special for girls born in 2011,during the first Elaine’s visit to Bolivia, said  Walker Paredes, the  Secretary of Sports, to the Agency Efe.
“We had girls training in all football schools but lacked give them a special place, a place where they feel identified. We had a conversation with Eliane and she told us that we should create a female football school, and that she could support us, “said Paredes.
Brazil’s support initially consists in training for the teachers of this school of La Paz, where the brazilian coach Joyce Rodrigues is going to give lectures and train the girls and teachers.
The former athlete will travel on Thursday to the city of Tarija, where it will remain until Sunday to learn about the sports programs that the City organizes with Petrobras.
Lili was very happy to learn that the Bolivian “cholitas” (indigenous women) also play football in the suburbs and in rural areas, and want to help them to develop.
The brazilian former player plans to take her project to Africa, despite  her momentary efforts are concentrated in Bolivia, where she want to make history.” 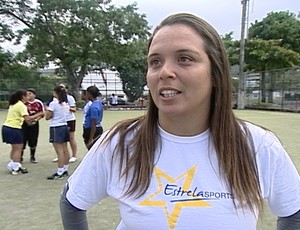