As the world watches Women’s Soccer explode on the International Stage, there is an incredible opportunity  for Women’s of less wealthy nations to compete for the first time in the South Asian Football Federation’s Women’s Cup.

The SAFF Tournament runs from September 8th with finals being played on September 16th.

In a sponsored tournament that evolved from its’ predecessor South Asian Association of Regional Cooperation (SAARC) Women’s Gold Cup, the SAFF Tournament is a fantastic opportunity for eight teams to participate in football and engage in high level play.

Columbo is no stranger to International tournaments. It’s a terrifically vibrant city with a lot of spirit- particularly for its’ sports teams. Although the Ceylonese Rugby & Football Club Ground only hold 500 spectators, the players are committed to excellence and good sportsmanship with full professionalism. 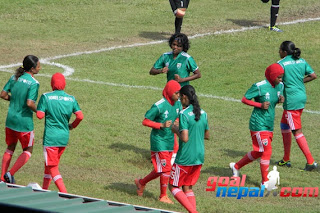 *Above: Team Bangladesh warms up*

This tournament caters to the different religions and clothing preferences of players.

There are hijab-wearing players with their legs covered to footballers in shorts with pony-tails sprinting down the field. There are no issues with players having to be disqualified due to choice of dress.

The players are able to focus on winning instead of dreading rejection of various Football Associations as was the case with Iran last year in  Women’s World Cup qualifying game.

Games are exciting and the polls are challenging.

India is ranked much further up the FIFA rankings  at an impressive #52 (and much higher than the Men’s squad who are currently at #169) and have thus far dominated the tournament.

Nepal and India have had women’s football programs in place for the last 25 years. The other countries’ have not have support, structure, facilities as long. Afghanistan and Pakistan being the most disadvantaged with their countries’ engulfed in geo-political conflicts.

Despite the odds, these footballers have fought beyond obstacles and perhaps cultural expectations. They have risen up with far less financial support than their male counterparts.

The SAFF Women’s Tournament was supposed to be held last year but was unable to find a sponsor. This year Holcim Cement has generously agreed to sponsor this great event.

These women do not have the commercial backings, magazine covers, modelling contracts and millions of dollars of infrastructure that Top Women’s Team are provided with.

They run on hard work and humility.

The participants are great representatives of “passion, dedication and belief”; understandably this years motto.

These athletes are excellent examples of how women may achieve anything if they are given a chance to thrive.

South Asian female footballers are shinning representatives of good sportsmanship and honouring culture. They couple inspiration with intensity and drive.

Their home countries should laud them and respect them with the highest acclaim- regardless of result. They are creating a precedent in the world of International Sport.

The world and International Football Federations must pay much attention to these players. They are setting the pitch for tomorrows superstars.

*Below: Team Maldives and Team Afghanistan walk onto pitch pre-match* 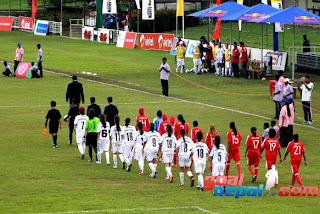